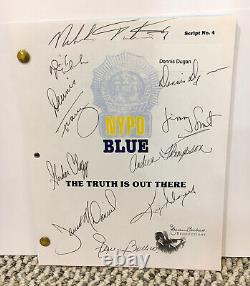 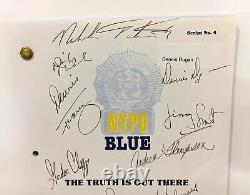 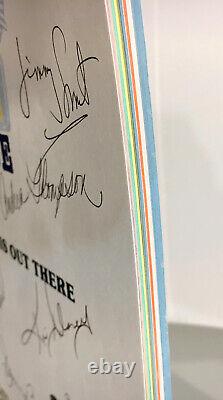 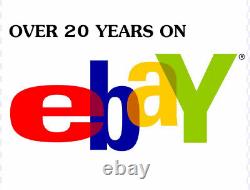 An authentic NYPD Blue cast signed script from season five. 1997 production script from the terrific ABC drama NYPD Blue was beautifully autographed on its cover in black ball-point pen by 10, including all of the main cast members at that time: Dennis Franz, Jimmy Smits, Kim Delaney, Gordon Clapp, James McDaniel, Nicholas Turturro, Andrea Thompson, the show's creators Steven Bochco (D-2018) and David Milch. This particular script was owned by this episode's Director Dennis Dugan, who also signed it. The script itself is in Excellent to Near Mint condition and includes many different color pages throughout. "The Truth Is Out There" first aired on October 28, 1997 and was the fourth episode of the show's fifth season.

This autographed script would look great framed up with a photo of the cast. Not a copy, or preprint; guaranteed to be original and authentic signatures of the cast of NYPD Blue. It is absolutely is guaranteed to pass any authentication company review. This item is in the category "Entertainment Memorabilia\Autographs-Original\Television".