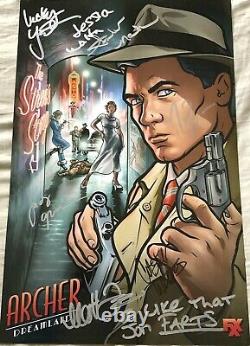 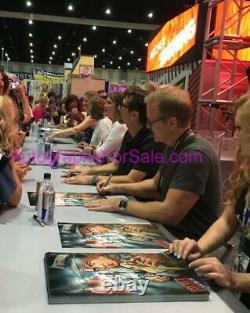 Archer Dreamland 2017 Comic-Con 11 by 17 inch mini poster autographed in black or silver Sharpie by the cast including H. Jon Benjamin, Amber Nash, Judy Greer, Aisha Tyler, Jessica Walter and Lucky Yates plus executive producers Matt Thompson (added I LIKE THAT JON FARTS to his signature) and Casey Willis for a total of 8 signatures. Obtained in person at very limited 2017 Comic-Con signing, with photo from the signing and certificate of authenticity from AutographsForSale.

LOWBALLERS WILL BE PERMANENTLY BLOCKED WITHOUT NOTICE. The item "Archer cast signed 2017 SDCC poster H. Jon Benjamin Greer Tyler Nash Walter Yates" is in sale since Sunday, May 10, 2020. This item is in the category "Collectibles\Autographs\Television". The seller is "autographs*for*sale" and is located in San Diego, California.