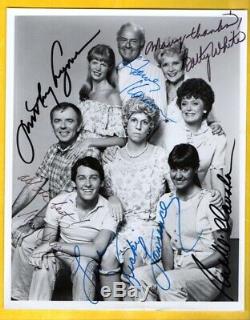 Thousands of Autographs in our inventory... SEND US A MESSAGE WITH YOUR WANT LIST..

Most of our signed photos are vintage items. As such they may exhibit tiny imperfections which will.

Be noted in the description. Significant flaws will be noted and often these are marked AS IS. Very minor condition issues not noted are of no concern for 99.9% of our customers.

The series is a spin-off of a recurring series of comedy sketches called "The Family" featured on The Carol Burnett Show (1974-78) and Carol Burnett & Company (1979). The sketches led to the made-for-TV movie Eunice, and finally the television series.

The show's theme song is "Bless My Happy Home" by Emmy and Grammy award winner Peter Matz (music) and Vicki Lawrence (lyrics). The show's producers chose to use an instrumental version. Mama's Family originally aired on NBC, debuting on January 22, 1983. After several timeslot changes and a subsequent drop in ratings, the network canceled the series after two seasons; the final episode from this two-season era of the series aired on April 7, 1984. NBC broadcast reruns until September 1985.

Two years after its cancellation, original series producer Joe Hamilton Productions (JHP) revived Mama's Family for new episodes in first-run syndication on local stations across the United States. The modified revival, produced by JHP and distributed by Lorimar-Telepictures, premiered on September 27, 1986. The modified series revival garnered substantially higher ratings than its original version, eventually becoming the highest-rated sitcom in first-run syndication. The revived run lasted four seasons and did not end by cancellation, but rather voluntarily on February 24, 1990.

ALL AUTOGRAPHS ARE ORIGINAL , AUTHENTIC HAND SIGNED ITEMS AND COME WITH CERTIFICATE OF AUTHENTICITY (COA). AUTOGRAPHS HAVE BEEN AUTHENTICATED, VERIFIED AGAINST TRUE VALID EXEMPLARS.

ALL AUTOGRAPHS COME WITH A CERTIFICATE OF AUTHENTICITY (COA) FROM STARMEMORIES AUTOGRAPHS. Our guarantee as stated with our COA is a lifetime guarantee for issues of authenticity. Minor condition issues for vintage items do not apply.

Rob Zarrillo is the owner of Starmemories Autographs and Movie Memorabilia. Dealer at Hollywood Collector's shows (Ray Courts shows and his successors), Cinecon (Hollywood), Cinevent (Columbus) and many others.