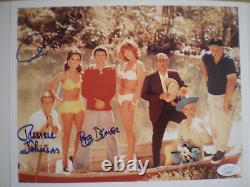 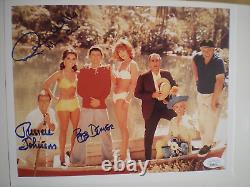 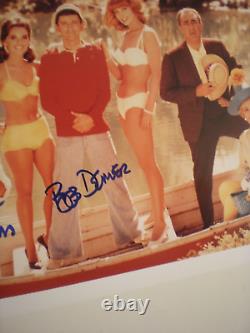 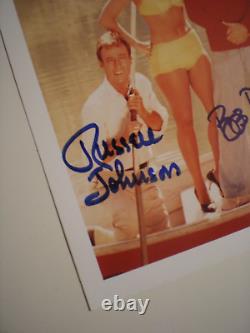 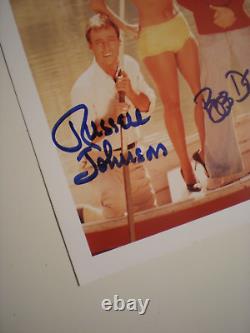 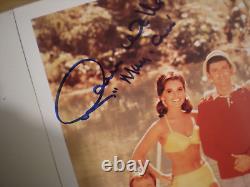 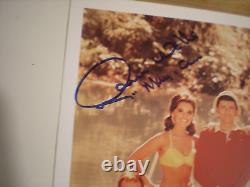 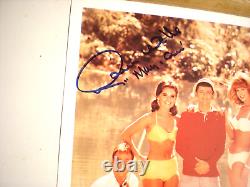 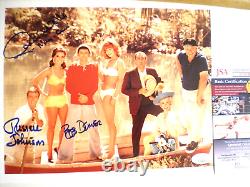 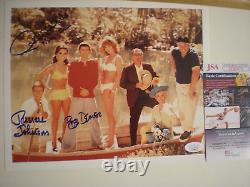 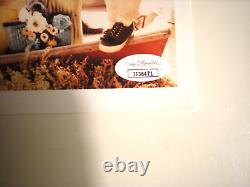 HELLO AGAIN HERE IS A TERRIFIC CAST PHOTO OF THE LATE DAWN WELLS AS'MARY ANN' -RUSSELL JOHNSON AS THE PROFESSOR AND BOB DENVER AS GILLIGAN FROM THE SITCOM "GILLIGAN'S ISLAND". TINA LOUISE IS THE LAST LIVING MEMBER OF THE SITCOM. GREAT PHOTO OF THE ENTIRE GROUP FROM POPULAR SITCOM HAND SIGNED AND COA INCLUDED ALONG WITH A CERTIFICATE OF AUTHENTICITY FROM JSA--CARD AND STICKER INCLUDED.

PHOTO IS 10 X 8 AND IN GOOD CONDITION. Gilligan's Island is an American sitcom created and produced by Sherwood Schwartz. The show had an ensemble cast that featured Bob Denver, Alan Hale Jr. Jim Backus, Natalie Schafer, Tina Louise, Russell Johnson, and Dawn Wells. It aired for three seasons on the CBS network from September 26, 1964, to April 17, 1967.

The series followed the comic adventures of seven castaways as they attempted to survive on an island on which they had been shipwrecked. Most episodes revolve around the dissimilar castaways' conflicts and their unsuccessful attempts, of which Gilligan was frequently responsible for the failure, to escape their plight.

Gilligan's Island ran for 98 episodes. All 36 episodes of the first season were filmed in black and white and were later colorized for syndication. The show's second and third seasons (62 episodes) and the three television film sequels (aired between 1978 and 1982) were filmed in color. The show received solid ratings during its original run, then grew in popularity during decades of syndication, especially in the 1970s and 1980s when many markets ran the show in the late afternoon. Today, the title character of Gilligan is widely recognized as an American cultural icon.

Dawn Elberta Wells (October 18, 1938 - December 30, 2020) was an American actress known for her role as Mary Ann Summers on the CBS sitcom Gilligan's Island. Johnson was best known for playing Professor Roy Hinkley (usually called the "Professor"), the very knowledgeable polymath who could build all sorts of inventions out of the most rudimentary materials available on the island. As Johnson himself pointed out, though, he could not fix the hole in the boat. In the first episode of the show, the radio announcer describes the Professor as a research scientist and well-known scoutmaster.

Gilligan's Island aired from 1964-67, but has been shown in reruns continuously ever since. Johnson reprised this character in three Gilligan's Island made-for-television movies and two animated series. In a 2004 interview, Johnson commented about the role and shared his perspective regarding Gilligan's Island and the situation comedy's place in television history.

It used to make me upset to be typecast as the Professor... But as the years have gone by, I've given in. Besides, the show went into syndication and parents are happy to have their children watch the reruns.

There are no murders, no car crashes. Just good, plain, silly fun. It's brought a lot of joy to people, and that's not a bad legacy. Following the cancellation of Dobie Gillis, Denver landed the title role on the sitcom Gilligan's Island, which ran for three seasons (1964-67) on CBS, and became a staple of later syndication. His role as the well-meaning but bumbling first mate among a small group of shipwrecked castaways became the one for which he is most remembered.

During the 1980s, he reprised the character of Gilligan for numerous cameo appearances, including episodes of ALF, Meego and Baywatch, and played a bartender in the film Back to the Beach 1987. ALL AUTOGRAPHS ARE GUARANTEED FOR LIFE. ALL AUTOGRAPHS ARE HAND-SIGNED BY THE CELEBRITIES INDICATED. THERE ARE NO PRE-PRINTS OR AUTOPENS.

WE ARE MEMBERS OF UACC (UNIVERSAL AUTOGRAPH CLUB) IN GOOD STANDING (#4050). WE ARE NOT REGISTERED DEALERS BUT DEDICATED COLLECTOR'S WITH MANY YEARS OF EXPERIENCE. WE ARE ALSO MEMBERS OF THE MANUSCRIPT SOCIETY ALONG WITH THE IADA-CC. ALL AUTOGRAPHS COME WITH OUR COA AND ARE GUARANTEED AUTHENTIC FOR LIFE. WE HAVE BEEN COLLECTING FOR MANY YEARS AND CHECK AUTOGRAPHS CAREFULLY FOR AUTHENTICITY.

WE WILL FIND OUT WHY YOUR ITEM HAS NOT BEEN DELIVERED. ALSO IF YOU PAY ON SUNDAY IT WILL NOT BE POSTED UNTIL THAT MONDAY. ALSO WE TRY TO RETURN ANY QUESTIONS WITHIN A COUPLE OF HOURS OR LESS. SO PLEASE SEND A MESSAGE IF YOU NEED A CLARIFICATION ON AN ITEM OR YOU HAVE A CONCERN.

ALL AUTOGRAPHS ARE PACKAGED WITH CARE. THEY ARE PLACED IN CARDBOARD AND MARKED "DO NOT BEND" TO INSURE THAT THEY ARRIVE IN GREAT CONDITION. IF YOU EXPERIENCE A DELAY IT IS DUE TO POSTAL CONDITIONS.

This item is in the category "Entertainment Memorabilia\Autographs-Original\Television". The seller is "robyn3613" and is located in this country: US. This item can be shipped worldwide.