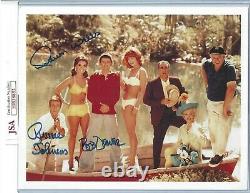 Note that items with COAs come with individual COAs, sticker usually on back of item. I do not accept "Best Offer". Prices are reduced every 30 days until the item sells. Thanks for understanding this policy! New items will be added the first of the month... Prices on existing items will be reduced at the end of each month. Gilligan's Island is an American sitcom. Created and produced by Sherwood Schwartz.

The show's ensemble cast. It aired for three seasons on the CBS. Network from September 26, 1964, to April 17, 1967. The series follows the comic adventures of seven castaways as they try to survive on an island where they are shipwrecked.

Most episodes revolve around the dissimilar castaways' conflicts and their unsuccessful attempts to escape their plight, with Gilligan usually being responsible for the failures. Gilligan's Island ran for 98 episodes. All 36 episodes of the first season were filmed in black and white and were later colorized. The show's second and third seasons (62 episodes) and the three television film sequels (aired between 1978 and 1982) were filmed in color. The show received solid ratings during its original run, then grew in popularity during decades of syndication, especially in the 1970s and 1980s when many markets ran the show in the late afternoon.

Today, the title character of Gilligan. Is recognized as an American cultural icon. Additionally, I slip all autographed photos inside sturdy photo-protective sleeves. In most cases, using Jack Smalling's baseball address lists and other assorted address lists, I wrote to both active and retired baseball players, sending them letters, requests for signatures, and self-addressed-stamped envelopes. This is how I obtained thousands of autographs.

I stand by every item I sell. All the old time autograph dealers know me and the professional authenticators will vouch for my reputation as well. I do this on a part time basis, so sometimes emails take a day.

PLEASE NOTE: Most items come with certificates of authenticity from outside companies (JSA and PSA predominantly; they are the best). Sincerely, Joe Binder , Downers Grove, Illinois. The item "Gilligan's Island Autographed 8x10 Cast Photo TV Show JSA Denver, Johnson, Wells" is in sale since Monday, November 1, 2021. This item is in the category "Entertainment Memorabilia\Autographs-Original\Television". The seller is "calabinder" and is located in Downers Grove, Illinois.