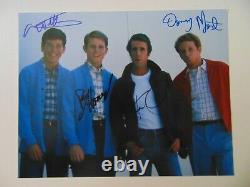 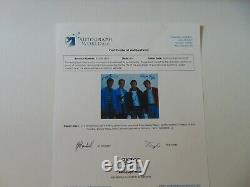 Signers are; Ron Howard, Donny Most, Henry Winkler and Anson Williams. This item is certified authentic by Autograph World and comes with their Certificate of Authenticity. That aired first-run from January 15, 1974 to September 24, 1984 on. With a total of 255 half-hour episodes spanning eleven seasons. The series was one of the most successful of the 1970s, an idealized vision of life in the mid-1950s to mid-1960s.

Arthur "Fonzie"/"The Fonz" Fonzarelli. As Richie's parents, Howard and Marion Cunningham. Happy Days became one of the biggest hits in television history and heavily influenced the television style of its time.