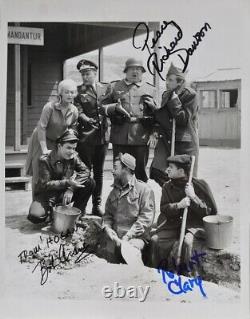 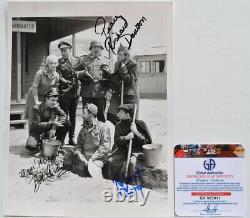 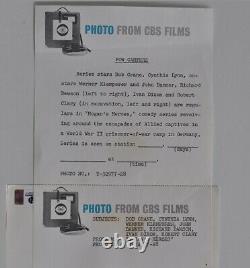 This is an AUTHENTIC HAND SIGNED ORIGINAL Vintage 7"x 9" BW photo of 3 main cast members in the TV series "HOGAN'S HEROES" featuring the autographs by Bob Crane, Richard Dawson, and Robert Clarey. Hogan's Heroes is an American television sitcom. Set in a Nazi German. It ran for 168 episodes (six seasons) from September 17, 1965, to April 4, 1971, on the CBS.

Played Colonel Wilhelm Klink, the gullible commandant of the camp, and John Banner. Played the blundering but lovable sergeant-of-the-guard, Hans Schultz. This is an awesome autographed piece of entertainment memorabilia and will look great framed. This signed photo comes with a Certificate of Authenticity.

All of the autographed items I have listed are from my personal collection. They were either obtained by me personally from the celebrity(s) or through a reputable dealer. If not satisfied with this item you may return it within 10 days.

This photo is boldly signed and is in Xlt. All photos are sent in either top loaders and/or archival acid free backer boards and clear plastic sleeves. 3-28-21 APOP BK#458-230 CHECK OUT OUR MANY OTHER GREAT ITEMS LISTED!

This item is in the category "Entertainment Memorabilia\Autographs-Original\Television". The seller is "moviemusiccollect" and is located in this country: US. This item can be shipped worldwide.