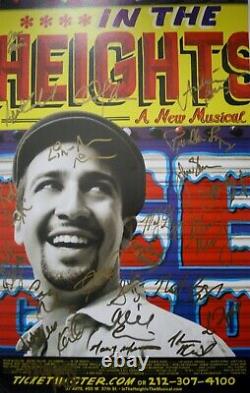 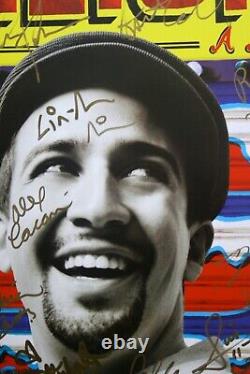 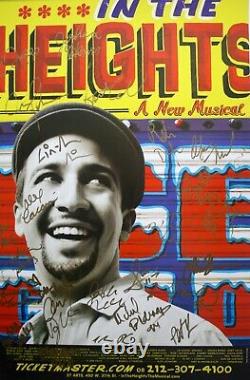 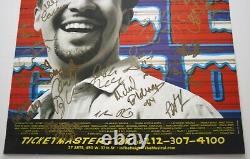 The musical opened at the 37 Arts Theater Off-Broadway, running from February 8, 2007, through July 15, 2007. Later to win several TONY Awards in 2007 during the Broadway run of IN THE HEIGHTS and again in HAMILTON. Most of the off-Broadway principals reprised their roles on Broadway in the opening original cast. This is a MUST for any serious theater collector.

Beautifully scribed in metallic gold marker, hand-signed authentic 24 cast & creative team signatures at the 37 ARTS (Renamed The Baryshnikov Arts Center), New York City. Signed face to face with all talents. There is minor corner damage in the bottom left hand corner on Poster #2, which will not be apparent when framed. Signature positions will be different on the 2nd poster to sell 2nd Poster is now the first display photo. Serious inquiries are always welcome.

THE ART OF SONG only sells under this name. We sell only rare and high quality theater memorabilia, since 1987. The item "IN THE HEIGHTS LIN-MANUEL MIRANDA, RARE 24 Cast Signed Broadway Poster HAMILTON" is in sale since Friday, May 10, 2019. This item is in the category "Entertainment Memorabilia\Theater Memorabilia\Posters\Originals-United States".

The seller is "theartofsong" and is located in New York, New York. This item can be shipped worldwide.