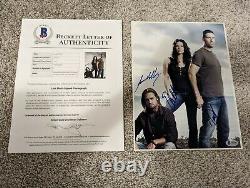 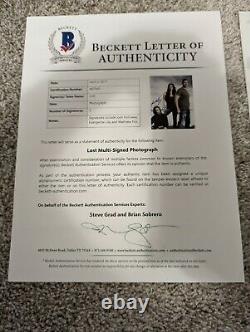 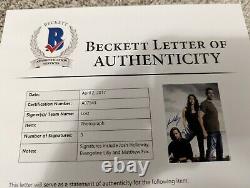 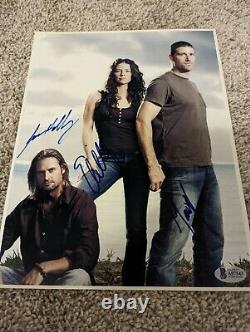 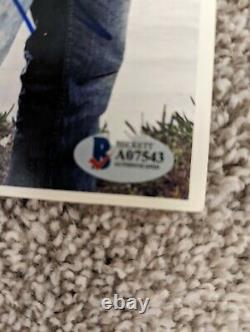 Lost Cast Signed JSA PSA BAS BECKETT Josh Holloway Evangeline Lily Matthew Fox. This is EXTREMELY rare because all three of these actors have stopped signing due to Covid. This picture also has all of them portrayed as their most iconic roles. Jack Shepard - Matthew Fox.

"Sawyer" James - Josh Holloway. Kate Austen - Evangeline Lily. Lost is shown on many television lists from IMDB to Google itself as one of the most famous shows in History. I got this autograph signed on May 8th, 2008 and proceeded to add the other two actors on December 13th, 2011 and October 22nd, 2015 at the Jimmy Kimmel show in Hollywood, California. That means in order to get this picture to be signed by all three, I had to wait 7 years of my life.

It was very difficult to obtain all these celebrities and this was pre-covid. Now I know it's impossible to get them. Not only that, but I even got it authenticated by Beckett so you can rest assured with completely no doubt that it's real. I provided a photo with the sticker so you can verify on the website that it matches. All these autographs are going up in value and it's an investment.

Not only that, but the actors are continuing on to new shows and movies. Josh Holloway recently reunited with JJ Abrams (same one who made Lost) to star in the series Duster. " Matthew Fox stopped his 11 year hiatus and is currently joining Joanne Froggatt (famous for Downtown Abbey) to do a new mini series thriller called, "Last Light. Evangeline Lily has been next to impossible to get since her joining Marvel. That fanbase is super difficult to get a signature from.

She's currently filming Ant Man 3 which is set to release in 2023. That alongside wrapping up the world's highest grossing film in history, Marvel Avengers Endgame. Just as a side note, Evangeline Lily is one of the most down to Earth celebrities I have ever known. Knowing all three stars are still in the spotlight of Hollywood and are only growing in value, don't miss your chance to obtain one of the best shows in History. Thanks so much for looking and please feel free to message me if you have any questions.

This item is in the category "Entertainment Memorabilia\Autographs-Original\Television". The seller is "riloh-72" and is located in this country: US.