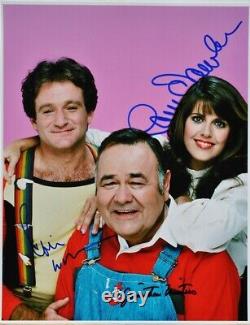 This is an AUTHENTIC HAND SIGNED ORIGINAL Vintage Large 11"x 14" color photo of the 3 main cast members in the TV series "MORK AND MINDY" featuring the autographs by Robin Williams, Pam Dawber, and Jonathan Winters. Mork & Mindy is an American sitcom television series that aired on ABC from September 14, 1978 to May 27, 1982. A spin-off after a highly successful episode of Happy Days, it starred Robin Williams as Mork, an extraterrestrial who comes to Earth from the planet Ork in a small, one-Orkan egg-shaped spaceship and Pam Dawber as Mindy McConnell, his human friend and roommate, and later his wife and the mother of his child. This is an awesome autographed piece of entertainment memorabilia and will look great framed.

This signed photo comes with a Certificate of Authenticity. All of the autographed items I have listed are from my personal collection. They were either obtained by me personally from the celebrity(s) or through a reputable dealer. If not satisfied with this item you may return it within 14 days. This photo is boldly signed and is in very good to xlt. All photos are sent in either top loaders and/or archival acid free backer boards and clear plastic sleeves. 11-7-17 POP BXP-11-50 (1 more BXP-5B). CHECK OUT OUR MANY OTHER GREAT ITEMS LISTED! This item is in the category "Entertainment Memorabilia\Autographs-Original\Television". The seller is "moviemusiccollect" and is located in this country: US. This item can be shipped worldwide.