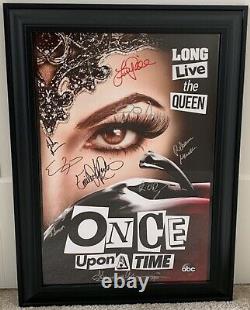 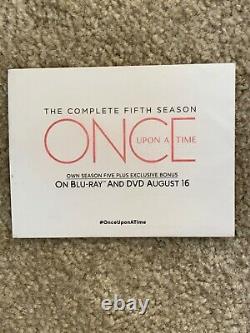 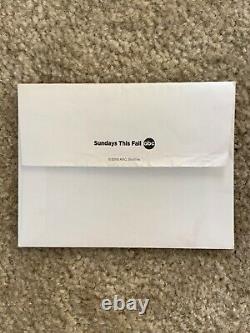 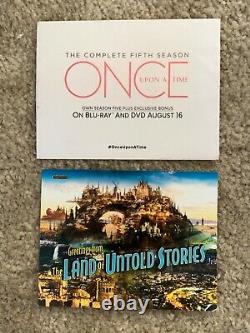 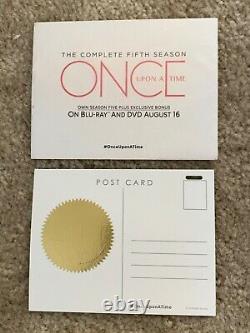 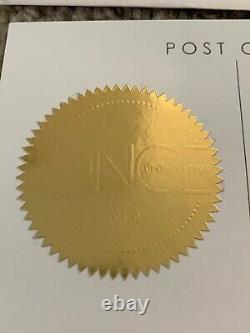 Once Upon A Time Cast Signed Framed Poster From Comic Con 2016. This television poster was obtained at the ABC Booth at Comic-Con 2016 by receiving a winning ticket with the Once Upon A Time gold star. My teenage daughter won this lottery herself.

Colin O'Donoghue - Killian Jones/ Captain Hook. Rebecca Mader - Selena/ The Wicked Witch. Some of these actors have starred in a variety of hit shows and movies and obtaining their autograph is very special.

Jennifer Morrison started her career as a child model, appearing in print advertisements for JCPenney and Montgomery Ward, and commercials for Rice Krispies and Mondo. She was featured on the cover of Sports Illustrated for Kids with basketball star, Michael Jordon, in May 1992.

Then at the tender age of 14, she made her feature film debut in the 1994 film "Intersection" and later appeared as Samantha in "Stir of Echos" (1999). Morrison's first leading role came in the 2000 film "Urban Legends: Final Cut".

Since that role, she has gone on to appear in films including "Grind" (2003), "Surviving Christmas" (2004), and Mr. In 2004, Jennifer won the role of immunologist Dr. She played the girlfriend of Pacey Whitter in one season of "Dawson's Creek", she joined the cast of "How I Met Your Mother", as a recurring character Zoey Pierson, a mischievous architecture nerd and love interest of main character Ted Mosby and who was touted as "the biggest female character we've maybe ever added to the show in Ted's life", according to executive producer Craig Thomas.

Abrams' "Star Trek", reboot as James T. After her contract on "House" was not renewed, it was announced in December 2009 that Morrison had won the role of Kate Keller, Helen Keller's mother, in the Broadway-bound revival of "The Miracle Worker".

In the fall of 2010 she appeared as a guest-star in the 4th episode of NBC's "Chase". In 2011, she appeared in "Warrior", a film about two estranged brothers who enter a mixed martial arts tournament and are forced to confront their struggling relationship with each other and with their father. Morrison plays the wife of Joel Edgerton's character, struggling to keep her family together. Since 2011, Morrison had her starring role in ABC's Once Upon A Time where we all know her as the lovable Emma Swan, a bail bonds collector who turns out to be the missing daughter of Snow White and Prince Charming. Then in April 2016, she launched her own film production company, Apartment 3C Productions, named after the apartment she shared with her friends during her time at Loyola University Chicago.

She directed her first feature film, "Sun Dogs", under this label during the summer of 2016. In December 2017, it was announced that Netflix had acquired worldwide streaming rights to the film. In March 2017, it was announced that Morrison was cast as Stephanie in an off-Broadway revival of the play "The End of Longing". The performance lasted from May 18 to July 1, 2017. She co-starred in "Amityville: The Awakening" that was released on Google Play in October 2017.

Then in June 2019, she can be seen this season (Fall 2019) on the NBC show "This Is Us", in a recurring role for the 4th season as Cassidy Sharp, an alcoholic and veteran of the US Marines grappling with her return to civilian life. Who we all fell in love with as Snow White's love interest and who took that fantasy into real life by marrying his co-star Ginnifer Goodwin during the filming of the show. They currently are enjoying their married life and have started their beautiful family too! Josh starred in the NBC drama "Manifest" last season.

Imagen Award for Best Supporting Actress for her portrayal of Theresa, a paramedic. Other roles included "Windfall" (2006), "Swingtown" (2008), "Miami Medical" (2010), "JAG", "Six Feet Under", "Covert Affairs", "Medium", "The Defenders", "Chase", "NYPD Blue", and she played the role of Sarah Gavin, a Counter Terrorist Unit agent during the 4th season of the FOX series "24" in 2005. In 2007, she guest starred as Greta during the 3rd season of ABC's hit show "LOST", then in 2008 she played a leading role on the Lifetime movie The Double Life of Eleanor Kendall, in which she played Nellie, a divorcee whose identity has been stolen.

Since her role on Once Upon A Time, Lana won a. In 2016 for Choice Sci-Fi/ Fantasy TV Actress! Her biggest fame came with the ABC adventure fantasy drama pilot, "Once Upon A Time" which debuted in October 2011. Lana Parilla's performance also received positive reviews and in 2012 and 2013, she was regarded as a promising contender for an. Emmy Award in the Outstanding Supporting Actress in a Drama Series category.

Even though she did not receive a nomination, she did win the. TV guide Award for Favorite Villain and the. ALMA Award for Outstanding Actress in a Drama series in 2012. Parilla also received a nomination for Best Supporting Actress on Television from the.

Rebecca Mader is best known for her roles as anthropologist Charlotte Lewis in the ABC series "LOST", Jessica Holt from the hit FOX TV series "FRINGE", and in June 2013 she was cast as the Wicked Witch of the West, a newer antagonist for the second half of the 3rd season of "Once Upon A Time". Rebecca also made a guest appearance during the second half of season 4 and was later promoted to a series regular for seasons 5 and 6. In May 2017, Mader announced that she would not be returning for the 7th season of the show, due to a creative decision by the show runners. However, in September 2017, it was then announced that she would be reprising her role as Zelena in a recurring capacity for the second half of the 7th and final season in which she ended up making seven appearances in the last season, including the series finale "Leaving Storybrooke". Not only are you getting the original poster signed by this incredible cast, we have chosen to frame it for you in a beautiful espresso wood colored frame.

There are no other options for meeting this cast all together again with the hopes of collecting all of their autographs. As far as we know, there is one last convention for the OUAT show occurring in New Jersey in a week. But even at this convention, not all of the bigger stars will be present. So take advantage of this special offer to own an exclusive cast signing from the sixth season of the hit ABC show "Once Upon A Time".

Each of these posters have matching frames. So they would look amazing hung up all together! If you are interested in purchasing more than one of these incredibly unique posters, please reach out and let me know.

The item "Once Upon A Time Cast Signed Framed Poster From Comic Con 2016" is in sale since Wednesday, October 23, 2019. This item is in the category "Entertainment Memorabilia\Autographs-Original\Television".