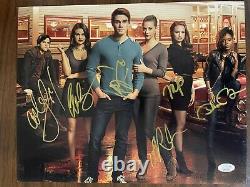 Madeline Petsch, KJ Apa, Camile Mendes, Lili Reinhart, Cole Sprouse, Ashleigh Murray. 11x14 Photo Signed in person by the above. Location of Signing: Los Angeles. Includes a signed Certificate of Authenticity from JSA. Based out of Vancouver, BC Hollywood North! Celebrity, music and athlete autographs for over 10 years.

We have built up a strong reputation in the business, our feedback speaks for itself. We are out collecting every single day, so please be patient if you ask a question about an item and we do not reply immediately. Follow us on Twitter for signing news. We started off as hockey autograph collectors as West Coast Ice Script; in 2009 New Moon began shooting in Vancouver. With all the hype surrounding the movie, we decided maybe it was time to venture into celebrity autographs.

The name "Outlaw Hobbies" was then chosen due to the huge animosity of crew working on the Twilight when we approached the cast for autographs. We were considered "Outlaws" to anyone working on the sets. This item is in the category "Entertainment Memorabilia\Autographs-Original\Movies\Photographs". The seller is "outlaw_hobbies" and is located in this country: US. This item can be shipped to United States, all countries in Europe, Canada, Japan, Australia.