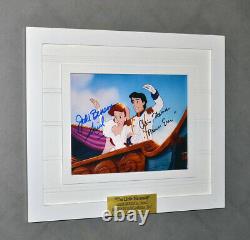 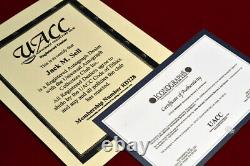 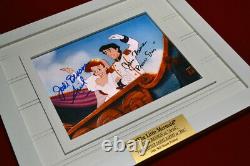 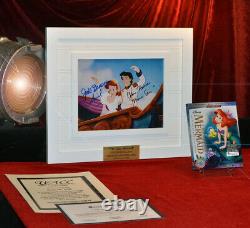 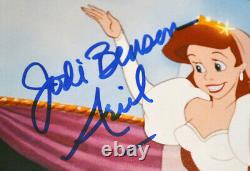 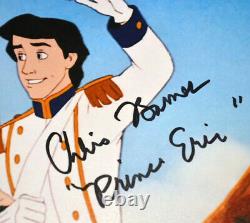 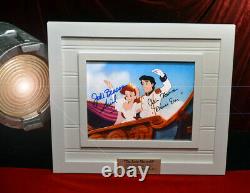 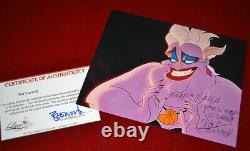 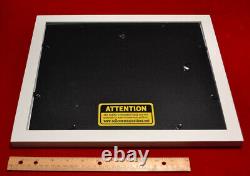 + you also receive this RARE autographed 8x10 color photo of PAT CARROLL (played "Ursala"). As a TV & Movie DIRECTOR and a lifetime member of the Director's Guild of America, D. I was also a huge "Little Mermaid" Fan! You get this ORIGINAL SIGNED Autographed Picture by JODI BENSON as "Ariel" that she signed in Blue Ink..

You get this ORIGINAL SIGNED Autographed Picture by CHRISTOPHER DANIEL BARNES as "Prince Eric" that he signed in Black Ink.. That includes this Original COA (Certificate of Authenticity) from world renowned ICONOGRAPHS Autographs that is guaranteed genuine for life by UACC Registered Dealer #228. This FRAMED EXHIBIT measures approximately 16" X 14" and comes in a new beautiful White FRAME.. It has this ENGRAVED PLAQUE attached to the frame that reads. This very nice Autographed DISPLAY is just ready to display in your Home, Office, Media Room or Museum!

On one of her visits to the surface, which are forbidden by her controlling father, King Triton, she falls for a human prince. Determined to be with her new love, Ariel makes a dangerous deal with the sea witch Ursula (Pat Carroll) to become human for three days. But when plans go awry for the star-crossed lovers, the king must make the ultimate sacrifice for his daughter.

Jodi Benson (born Jodi Marie Marzorati ; October 10, 1961) is an American actress, voice actress and singer. She is best known for providing both the speaking and the singing voice of Disney's Princess Ariel in The Little Mermaid and its sequel, prequel, and television series spinoff. Benson voiced the character Barbie in the 1999 Golden Globe-winning movie Toy Story 2 and its 2010 Academy Award-winning sequel Toy Story 3. She also voiced Barbie in the Toy Story cartoon Hawaiian Vacation. For her contributions to the Disney company, Benson was named a Disney Legend in 2011.

She also gave voice to the spirited "Weebo" in Disney's live action Flubber , starring Robin Williams. She created the voice of Thumbelina in 1994, a Don Bluth animated feature film with songs by Barry Manilow. Her other projects include Tinkerbell: Secret of the Wings , The Little Mermaid: Ariel's Beginning , The Little Mermaid II: Return to the Sea , Lady and the Tramp II: Scamp's Adventure , 101 Dalmatians II: Patch's London Adventure , Balto II: Wolf Quest , and Balto III: Wings of Change. She appeared as Patrick Dempseys assistant Sam, in Disneys live-action feature film Enchanted. While being a Disney Legend, she also voiced Jane Doe and Patsy Smiles in Cartoon Network's Camp Lazlo.

Barnes , is an American actor and voice actor. He is best known for his voice role as the title superhero of the 1994 animated series Spider-Man , Prince Eric from The Little Mermaid , as well as his on-screen portrayal of Greg Brady in the films The Brady Bunch Movie and A Very Brady Sequel. Barnes earned his BA in 2004 and his MA in 2009 and enjoys reading, writing short stories, playing the guitar, and practicing yoga.

The original AUTOGRAPH has been stored in an acid free case in a smoke free, pet free environment until removed to put in the exhibit. This one-of-a-kind framed "LITTLE MERMAID" AUTOGRAPH is framed and ready to display in your Media Room, Office or Museum! The condition of the Autograph is very good... The Frame is in new condition... Colors are bright and makes a beautiful presentation.

Check out our other auctions for more TV & Movie Collections that include other DISPLAYS & COLLECTIONS + other Wardrobes, Props, Art & Autographs. Sell is a Registered Dealer with the U. We are proud that some of our memorabilia is on display in the SMITHSONIAN, Washington, D. Heimdell51 Praise: Great guy; very prompt & efficient service & exc.

Packaging; got a free bonus too! Austinpowheinybeer Praise: GREAT GREAT GREAT!! Toothfella Thanks for the super helmet Jack!

Belfast Praise: Wonderful Ebayer & with genuine COA's too! THANKS TO THE OTHER 10,000 GREAT EBAYERS WE'VE HAD THE HONOR OF WORKING WITH FOR OVER 15 YEARS....

AND, WE LOOK FORWARD TO MEETING MANY MORE GREAT EBAYERS IN THE FUTURE FROM ALL OVER THE WORLD! If this autograph is declared not to be authentic, we may ask the purchaser to supply the full written opinion of one competent authority acceptable to us. This particular Framed Collection includes an Original 8X10 COLOR PHOTO Signed by both of the stars JODI BENSON & CHRISTOPHER DANIEL BARNES , Certificate of Authenticity (COA) that guarantees these Signatures genuine for life by world renowned ICONOGRAPHS Autographs & UACC Registered Dealer #228 + a new White FRAME and Engraved PLAQUE + factory sealed blu ray DVD! A GREAT piece of Motion Picture history.... A real "One of a Kind" Find & Conversation Pieces.... Movie & Television Props & Autographs can make for a good investment as well! Check out our other auctions for more great finds that include. Props, Costumes & Autographs for your favorite movies... Imagine giving this great Autographed "The LITTLE MERMAID" Collection to the Disney Fan in your family or just keeping it for yourself for what could be a good investment!

The seller is "jackmsell" and is located in New Port Richey, Florida. This item can be shipped worldwide.