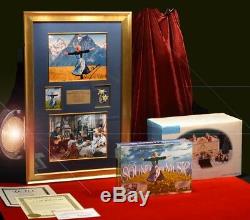 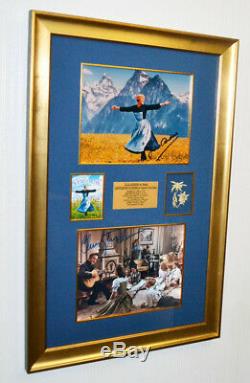 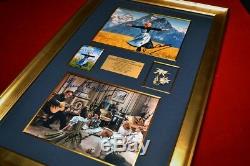 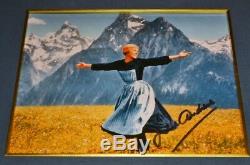 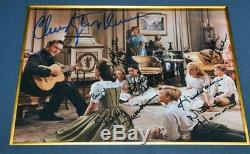 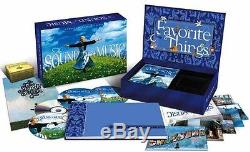 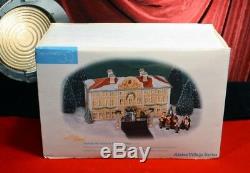 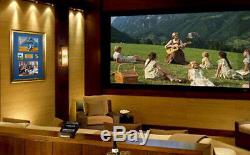 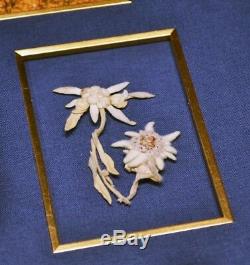 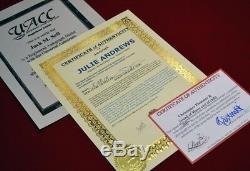 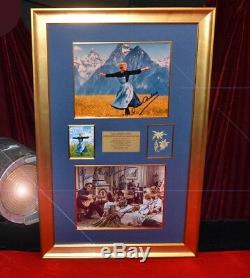 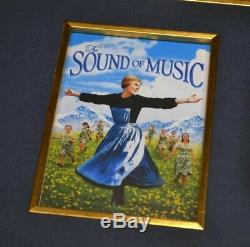 And, the COMPLETE Cast Autograph of CHRISTOPHER PLUMMER & ALL 7 Child Actors from. This AUTOGRAPHED color Photo was signed in person by ALL 7 Actors who played the "VON TRAPP Children" in "The Sound of Music" as well as CHRISTOPHER PLUMMER as "Captain Von Trapp".

The Oscar Winning Star JULIE ANDREWS also signed a separate color 8x10 PHOTO that is matted at the top of this beautiful display.. One of the RAREST Motion Picture AUTOGRAPH collections of ALL TIME! This is a very RARE & HIGHLY PRIZED Authentic Collection of one of the most famous MOTION PICTURES ever & includes all this.

Original Framed Cast Photo AUTOGRAPHED by JULIE ANDREWS & 7 Actors who played the "VON TRAPP Children" in The Sound of Music. Original Certificates of Authenticity for the Autograph guaranteed genuine from world renowned autograph dealer Piece Of The Past & UACC RD#228 for the SEVEN CHILD CAST MEMBERS & CHRISTOPHER PLUMMER and JULIE ANDREWS. A special boxed edition BLU RAY DVD Collector's SET of "THE SOUND OF MUSIC" (NTSC, Region One)...

That includes a copy of the original PROGRAM, Soundtrack CD, Music BOX & MUCH MORE! A rare DEPARTMENT 56 minerature model that is Mint in the Box of the VON TRAPP family home in Austria. There's even a wonderful piece of EDLEWEISS from the Alps that is matted in the large new custom gold FRAME engraved Descripition PLAQUE mounted under the blue cloth acid-free matte with gold fillets. This RARE, Original Autograph is beautifully framed in a large gold custom Framed Shadowbox & acrylite glass with acid-free blue cloth matte with gold fillets.. This beautiful display includes this rare Color PHOTO that was Signed by the Oscar Winning Star JULIE ANDREWS in Black Marker..

The other color photo was signed by the Oscar winning actor CHRISTOPHER PLUMMER as "Captain Von Trapp" in Blue Marker.. All 7 Child ACTORS also signed this color photo in Black Marker.

CHARMAIN CARR, ANGELA CARTWRIGHT, DEBBIE TURNER & KYM KARATH. You get an original CERTIFICATE of AUTHENTICITY for the CAST AUTOGRAPH issued by world famous PIECE OF THE PAST AUCTIONS signed by KEVIN MARTIN & UACC Registered Dealer #228.

Under this Rare ORIGINAL Autograph is an engraved brass metal description plaque mounted under the glass of this large framed Shadowbox that reads. This Rare "SOUND OF MUSIC" Collection also includes this wonderful piece of EDLEWEISS... These famous native Flowers were obtained from the Austrian mountains where some of the scenes were filmed in "The Sound of Music" and mounted in a new gold dimensional frame.. And this beautiful Logo is matted under the blue cloth matte with gold fillets.. The large, custom gold frame shadowbox measures an overall 28" x 18"...

The Framed Shadowbox is in new condition and is matted with acid-free blue cloth & gold fillets under UV acrylite glass (non breakable) to give it a beautiful, overall appearance... And keep this priceless collection safe for years to come.

A RARE & Wonderful GIFT for the "Sound of Music" Fan in your life!! And with Charmain Carr's passing, there cannot be another reunion with the entire cast ever again. ANGELA CARTWRIGHT (who plays "BRIGITTA") also helped get the cast together to sign this great cast PHOTO.. And, I want to personally thank ANGELA CARTWRIGHT!

As a 10 year old kid watching "Sound of Music, " I really had a crush on Angela! I also became a even bigger fan when I watched her play "Penny" on the "LOST IN SPACE" television series!!! And, I watched her on Oprah's special some years ago... I've been happily married for over 30 years, but I'm still a huge fan!

Thanks for the great memories, Angela! And, thanks for the personal autographs you sent me from Lost in Space & Sound of Music last year... I have them hanging in my office! You also receive this special limited edition Boxed BLU RAY DVD Collector's SET of the Academy Award Winning Motion Picture. Audio commentaries with Julie Andrews, Christopher Plummer and director Robert Wise.

Your Favorite Things: An Interactive Celebration - all-new immersive viewing experience with behind-the-scenes images, on-screen lyrics, trivia track and location quiz. Live Lookup Powered by IMDb. Musical Stages: Creating The Sound of Music - all-new interactive "backlot tour" with in-depth featurettes on the songs, the stage show & movie, the film and sound restoration and the real-life von Trapp family. A City of Song - virtual map of filming locations in Salzburg, Austria. Vintage Rodgers & Hammerstein and The Sound of Music programs, including a parody with Carol Burnett and Julie Andrews, and an interview with the real Maria von Trapp on The Julie Andrews Hour.

Reproduction of the original 1965 Souvenir program. Exclusive "My Favorite Things" Music Box with letter of authenticity. The real Von Trapp family lived in this beautiful home in Austria.. And this model of the famous house was made by DEPARTMENT 56... And you receive this beautiful display mint in the box with all these painted pieces.

This RARE Framed COLLECTION is just ready to hang or display on your Wall of your Home, Office, Museum or Media Room! This magical, heartwarming, true-life story that has become the most popular family film of all time. Rodgers and Hammerstein's The Sound of Music has Julie Andrews lighting up the screen as Maria, the spirited young woman who leaves the convent to become governess to the seven children of Captain von Trapp, an autocratic widower whose strict household rules leave no room for music and merriment. Rodgers and Hammerstein's The Sound of Music is a 1965 American musical film directed by Robert Wise and starring Julie Andrews and Christopher Plummer. The film is based on the Broadway musical The Sound of Music, with songs written by Richard Rodgers and Oscar Hammerstein II, and with the musical book written by the writing team of Howard Lindsay and Russel Crouse and screenplay written by Ernest Lehman.

The musical originated with the book The Story of the Trapp Family Singers by Maria von Trapp. It contains many popular songs, including "Edelweiss, " "My Favorite Things", "Climb Ev'ry Mountain", "Do-Re-Mi", "Sixteen Going on Seventeen", and "The Lonely Goatherd", as well as the title song. The movie version was filmed on location in Salzburg, Austria; Bavaria in Southern Germany; and at the 20th Century Fox Studios in California.

It was photographed in 70mm Todd-AO format by Ted D. It won a total of five Academy Awards including Best Picture and displaced Gone with the Wind as the highest-grossing film of all-time. The cast album was also nominated for a Grammy Award for Album of the Year.

In 2001, the United States Library of Congress selected the film for preservation in the National Film Registry as it was deemed "culturally, historically, or aesthetically significant".. Director Robert Wise won an Oscar for BEST DIRECTOR of "The Sound of Music" and the Movie also won the Oscar for BEST MOTION PICTURE. We might pay more for our autographs or sell even those from our personal collection, but we want to make sure that what we acquire is absolutely genuine and in the best condition to not only make this a valuable piece for your family to enjoy, but also a valuable investment piece. I direct movies & television shows, but have also been an avid collector of Historical & Movie Autographs, Art, Props & High End Collectibles for a quarter of a Century. CHECK OUT OUR OTHER AUCTIONS FOR MORE GREAT ITEMS INCLUDING AUTOGRAPHS of famous People, Movie & Television Prop & Costume Collections, rare Toys, POSTERS and more "ONE OF A KIND" finds!

They cannot be duplicated or reproduced or posted anywhere without the express written permission of Sell Communications... If this autograph is declared not to be authentic, we may ask the purchaser to supply the full written opinion of one competent authority acceptable to us. Sell is a Registered Dealer with the U. Btbandabbermake3s PRAISE: Fantastic items, 30 Star Movie Maker! Heimdell51 "PRAISE: "Great guy; very prompt & efficient service & exc.

Circus10 PRAISE: Fabulous costume, vintage RBBB. PRAISE: Wonderful Ebayer & with genuine COA's too! AND, THANKS TO THE OTHER 10,000 GREAT EBAYERS WE'VE HAD THE HONOR OF WORKING WITH FOR OVER 15 YEARS.... WE LOOK FORWARD TO MEETING MANY MORE GREAT EBAYERS IN THE FUTURE FROM ALL OVER THE WORLD! A GREAT piece of Motion Picture History.....

A real "One of a Kind" Find & Investment Piece.... Movie & Historical Autographs, Artifacts, Posters, Props & Art can make for a good investment as well! Check out our other auctions for more great items, including AUTOGRAPHS, Movie & Television PROP & COSTUME COLLECTIONS, SPACE Memorabilia, Historical Collections. THE SOUND OF MUSIC, the greatest musical Motion Picture of all time... A great & RARE COLLECTION! This is a very RARE & HIGHLY PRIZED Authentic Collection of one of the most famous MOTION PICTURES of all time & includes.. VERY RARE Original Framed Cast Photo AUTOGRAPHED by JULIE ANDREWS & CHRISTOPHER PLUMMER + all 7 Actors who played the "VON TRAPP Children" in "The Sound of Music" - ANGELA CARTWRIGHT, NICHOLAS HAMMOND, KYM KARATH, CHARMAIN CARR, HEATHER MENZIES, DEBBIE TURNER and DUANE CHASE, accompanied with 2 Original Certificates of Authenticity for the Autographs guaranteed genuine by UACC RD#228 and PIECE OF THE PAST, a special boxed factory sealed edition BLU RAY DVD Collector's SET of "THE SOUND OF MUSIC" (NTSC, Region One), a piece of EDLEWEISS that was obtained from the Austrian mountains where they filmed "The Sound of Music in a new gold frame, " all matted in the huge carved gold FRAME with the engraved PLAQUE mounted under acid-free matte with gold fillets under UV Glass.

Finally, you receive this near mint boxed set of the VON TRAPP family home made by Department 56. The VERY RARE autographed CAST PHOTO of Seven VON TRAPP "child" Actors was obtained during 2012, when the cast united at the HOLLYWOODCOM Autograph Show in Los Angeles..

The Autographs are in near mint condition.. A GREAT & RARE COLLECTION from this legendary Oscar Winning MOTION PICTURE!

WE ALSO OFFER A 3 MONTH LAYAWAY PLAN WHERE YOU CAN MAKE 3 EQUAL MONTHLY PAYMENTS TO US & WE DON'T CHARGE ANY INTEREST.... Check out our other auctions for more great items including Autographs, Scripts, Costumes and Props for both the serious collector and for fun!

THE ULTIMATE "SOUND OF MUSIC" COLLECTION! A GREAT piece of MOTION PICTURE & MUSIC history..... A real "One of a Kind" Find & Conversation Piece!

Check out our other auctions for more Music, Art, Television & Movie Memorabilia! The item "Signed SOUND OF MUSIC Julie Andrews + Entire CAST Autographs, COA UACC Frame DVD" is in sale since Friday, April 12, 2019. This item is in the category "Entertainment Memorabilia\Autographs-Original\Movies\Photographs". The seller is "jackmsell" and is located in New Port Richey, Florida. This item can be shipped worldwide.