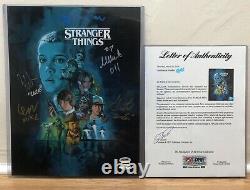 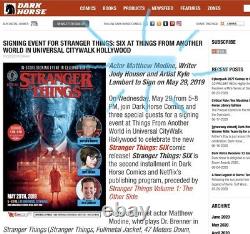 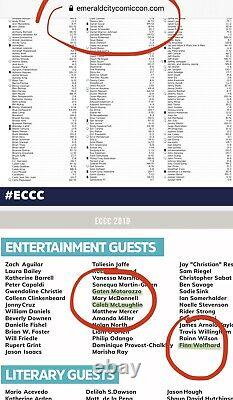 Stranger Thungs Cast Signed 11x14 poster Wolfhard Millie. Inscriptions of character names and quotes have become a level up in the autograph world because celebrities arent that willing to oblige those requests. They don't want to be told what to do.

The 3 main boys (Finn Wolfhard, Caleb McLaughlin, & Gaten Matarazzo) from the series were nice enough to add their character name upon request because their autograph lines were short at that time. The Matthew Modine signature was obtained at the Dark Horse comic store at the Universal City Walk. He was promoting a Stranger Things comic by Jody Houser. His autograph is the only signature that has't been authenticated.

Please refer to photo of poster for approval. By purchasing this item, you have a BIG head start with collecting the rest of the cast's signatures. "Hopper" and "Will" should be easy to get at conventions.

The item "Stranger Things Cast Signed Auto 11x14 poster Wolfhard Millie PSA authenticated" is in sale since Sunday, August 30, 2020. This item is in the category "Entertainment Memorabilia\Autographs-Original\Television". The seller is "mlsfan" and is located in Burbank, California.

This item can be shipped to United States, Canada, Mexico, Bermuda.