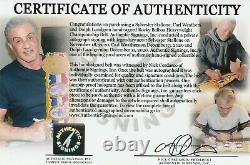 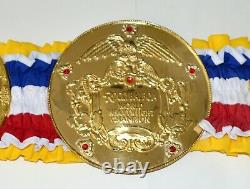 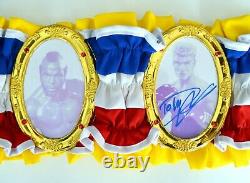 SYLVESTER STALLONE WORLD ICON SIGNS FOR AUTHENTIC SIGNINGS, INC!! THE ONE ANY ONLY FULL SCALE ROCKY BALBOAD CHAMPIONSHIP BELT AUTOGRAPHED BY SYLVESTER STALLONE, CARL WEATHERS AND DOLPH LUNDGREN!! WE WERE GIVEN ACCESS TO THE ACTUAL BELT USED IN THE ROCKY SERIES AND THIS BELT IS SCREEN ACCURATE AS YOU CAN GET!! RETAIL VALUE IS PRICELESS FOR ANY HOLLYWOOD COLLECTOR!! Sylvester Stallone has established worldwide recognition as an actor, writer and director since he played the title role in his own screenplay of Rocky, which won the Academy Award in 1976 for Best Picture.

Rocky grew to a franchise of five sequels and in 2006 Stallone concluded the series with Rocky Balboa , a critical and audience success which resolutely confirmed both Stallone and Rocky as iconic cultural symbols. In more recent times, Stallone. Wrote, directed and starred in Rambo. The saga of Vietnam vet John Rambo twenty five years after the debut of Rambo: First Blood. Stallone then released his a most ambitious project , the action thriller The Expendables¸ which he has wrote, directed and starred in.

This makes Sylvester Stallone the only actor to open a Number One Film across Five Decades. The Rocky Balboa World Heavyweight Championship belt is now available and for the first time ever its being offered officially licensed, approved and designed by Sylvester Stallone. Ade from heavyweight cast metal, this Rocky Balboa Championship Belt Prop Replica makes an amazing display piece and collectible for fans all over the World. This prop replica is casted in metal with a gold plated finish, genuine leather and layers of ruffled satin just like the original used by Rocky Balboa and others in the ROCKY franchise. The 4 metal picture frames feature images of the various icons in the ROCKY series including Rocky Balboa, Apollo Creed, Clubber Lang and Ivan Drago.

Measures 42-inches long and weighs 2 pounds. During our private signings celebrities typically sign several of the same item and our listing photos are used to show general quality and placement of the autograph. All autographs will be slightly unique as they are hand-signed by each celebrity Buyers will not necessarily receive the exact autograph shown unless otherwise specified in description, but you can be assured of receiving an un-smudged, quality signature. This belt comes authenticated by Authentic Signings, Inc. And on our newly designed certificate of authenticity are photos of Sylvester Stallone holding the belt up after it was autographed and also photos of Carl Weathers and Dolph Lundgren signing from our private signing with them. The item "Sylvester Stallone & Cast Autographed ROCKY BALBOA Championship Belt ASI Proof" is in sale since Tuesday, January 5, 2021. This item is in the category "Entertainment Memorabilia\Autographs-Original\Movies\Other Orig. The seller is "authenticsigningsinc" and is located in Beverly Hills, California. This item can be shipped worldwide.