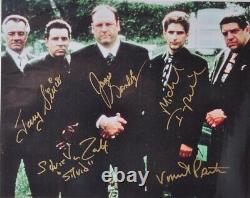 This is an AUTHENTIC HAND SIGNED ORIGINAL Vintage 8"x 10" color photo of the 5 main male cast members cemetery scene in the TV series "THE SOPRANOS" - featuring the autographs by James Gandolfini, Tony Sirico, Michael Imperioli, Steven Van Zandt, and Vincent Pastore. The Sopranos is an American crime drama television series created by David Chase. The story revolves around Tony Soprano (James Gandolfini), a New Jersey-based Italian-American mobster, portraying the difficulties that he faces as he tries to balance his family life with his role as the leader of a criminal organization. These are explored during his therapy sessions with psychiatrist Jennifer Melfi (Lorraine Bracco).

This signed photo comes with a Certificate of Authenticity. All of the autographed items I have listed are from my personal collection. They were either obtained by me personally from the celebrity(s) or through a reputable dealer. If not satisfied with this item you may return it within 10 days. This photo is boldly signed and is in Xlt.

All photos are sent in either top loaders and/or archival acid free backer boards and clear plastic sleeves. The item "THE SOPRANOS CAST Signed Photo X5 Cemetery Scene James Gandolfini + withCOA" is in sale since Monday, September 20, 2021. This item is in the category "Entertainment Memorabilia\Autographs-Original\Television". The seller is "moviemusiccollect" and is located in Cambria, California. This item can be shipped worldwide.