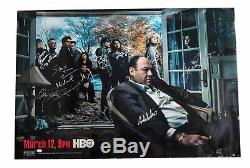 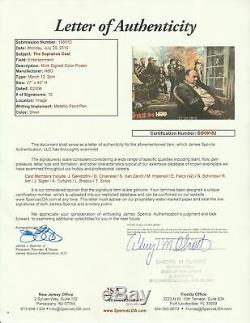 The Sopranos Complete Cast Signed Original HBO 2006 27x 40 Poster 12 Sig JSA COA. Presented is an HBO promotional poster for The Sopranos with 12 signatures of the original cast, including the late James Gandolfini.

The poster image, promoting the 2006 season, shows Gandolfini, as lead character Tony Soprano, seated in an armchair in front of open patio doors with the cast arrayed behind him. All 12 signatures from the cast are in silver marker on the poster, and include Gandolfini (over his right shoulder), Dominic Chianese, Steve Van Zandt, Michael Imperioli, Edie Falco (twice), Steve Schirripa, Robert Iler, Jamie-Lynn Sigler, Aida Turturro, Lorraine Bracco and Tony Sirico. The show premiered on HBO on January 10, 1999. It ran for six seasons totaling 86 episodes until June 10, 2007.

Gandolfini won three Emmy Awards, three Screen Actors Guild Awards, and one Golden Globe Award for his role. Gandolfini's performance as Tony Soprano is widely regarded as among the greatest performances in television history. This item comes with a full LOA from JSA (BB08182). There is creasing on the edges.

We specialize in sports autographs and memorabilia. We have one of the largest selections of baseball autographs in the country. The item "The Sopranos Complete Cast Signed Original HBO 2006 27x 40 Poster 12 Sig JSA COA" is in sale since Wednesday, January 8, 2020.

This item is in the category "Entertainment Memorabilia\Autographs-Original\Television". The seller is "showpiecessports" and is located in Deal, New Jersey. This item can be shipped to United States.