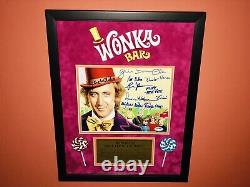 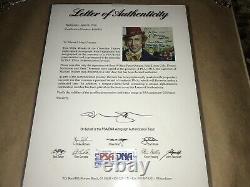 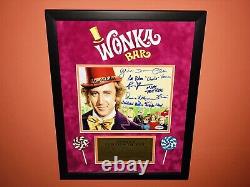 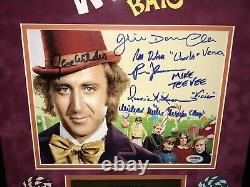 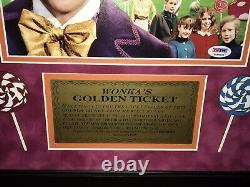 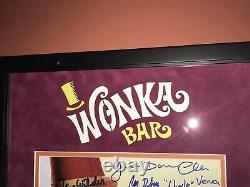 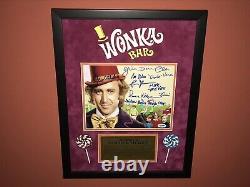 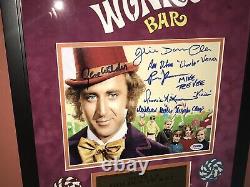 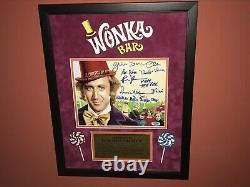 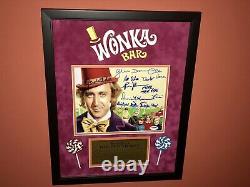 For your consideration is the rare Willy Wonka & the Chocolate Factory Framed and Matted Autographed Movie Poster that is Hand Signed by 6 Cast members including Gene Wilder - Willy Wonka , Peter Ostrum - Charlie Bucket , Julie Dawn Cole - Veruca Salt , Denise Nickerson - Violate Beauregarde , Paris Themmen - Mike Teevee & Michael Bollner - Agustus Gloop. This is the most complete Cast Signed Willy Wonka Collectable out there. Gene Wilder Signed this for his Private Signing with OC Dugout in 2015. The 5 Kids Signed this whole at a private signing. Gene Wilder's role as Willy Wonka is one of the most Historic roles in Movie History.

Comes with PSA IN PRESENCE Authentication for Gene and all of the kids but Mike TV who is still authenticated. Actual Photo measures 8 x 10 and the Frame is around 15.5 x 20 inches. Framed and matted with all of the works including Die-Cut Lettering with prop lollipops, Dry-mounted prop Golden Ticket, Museum Masterpiece 99% UV Protection Glass, Double Velvet Mattings with Orange and Vivid Purple, Preservation Fit, and Acid Free Foam Core Backing.

Collect something you can Display. We provided numerous photos shown in the description because we feel that it's important for you to examine this Collectable's Authenticity. Gene Wilder only did 2 Private Signings. If they did not get it at these 2 Signings or at his book signing it is most likely fake. Outside items were forbidden at his Book signing so that didn't happen. Do not be fooled, ask questions.